Children frequently get rashes. It is just part of growing up. As a parent, it’s important as part of your “kid’s health knowledge” to know a little about children’s rashes so that you can work out if it's a serious rash or not.

Most rash are red and splotchy and no one can really tell you what caused it. They go away, leaving no one much the wiser.

There are other rashes that are specific to certain illnesses such as chicken pox, measles, rubella and slapped cheek syndrome. (There are enough disease specific rashes to fill a text book!)

One Scary Childhood Rash that All Parents Should Know

There is one notable rash that it is really really important that you know how to look for. The rash is called a ‘non-blanching’ rash and doesn’t fade when you press it. 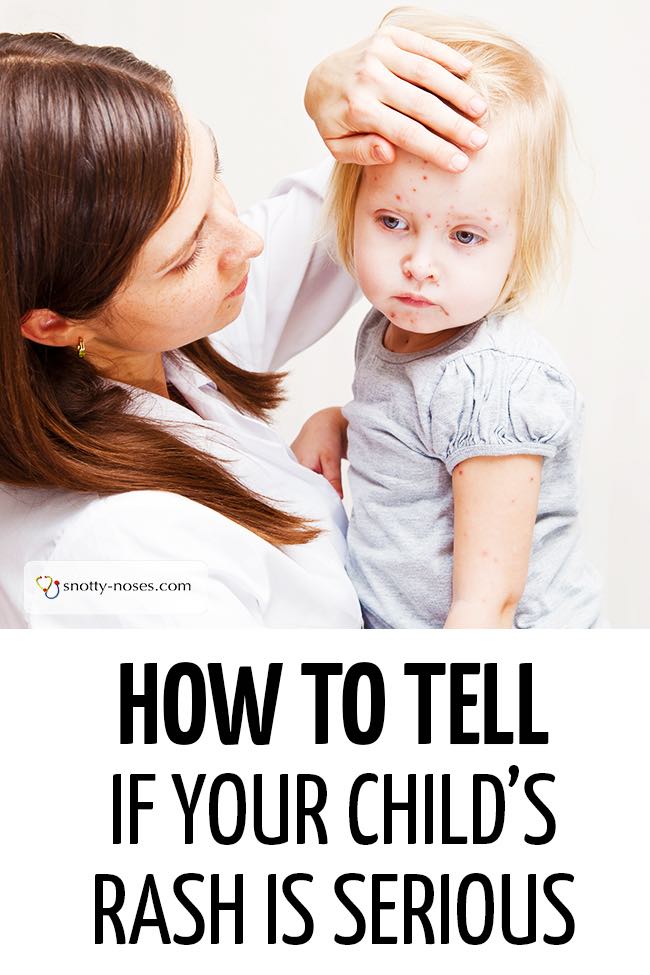 Rashes can be divided up in many different ways, but one way is to divide them into 'blanching' and 'non-blanching'.

What is a Non-Blanching Rash?

Sometimes a non-blanching rash is really really small, only the size of a pin prick (called a ‘petechial’ rash).

Check out How to tell if a rash is blanching

Why is a Non-Blanching Rash so Important?

There are many causes of a non-blanching rash and not all of them are serious (for example, some children get a petechial rash around their eyes when they vomit). BUT there is a really really nasty disease called ‘septicaemia’ which often presents with a non blanching rash.

When I say "serious" I mean that children (or adults) can die quickly of septicaemia. Early treatment with antibiotics saves lives.

Get Your Non Blanch Rash Checked Out by a Doctor

It is therefore, worth taking your child to a doctor if they have a non blanching rash.

Let me say it more loudly:

Related: 10 Things Most Children Don’t Know About Their Mother

Now that we have covered the worst possible scenario, let’s have a think about the other rashes that children get. There are certain infectious diseases that come with their own special rashes (chicken pox, measles, rubella, slapped cheek syndrome, scarletina, hand-foot and mouth disease).

Without writing an entire medical text book, it’s a bit difficult to cover them all in detail.

Related: What to do When Your Toddler Won’t Eat

The 'Non-Specific' Rash or Viral Xanthoma.

The most common rash that I see in hospital is the ‘non-specific’ rash or viral xanthoma.

Often I see children who are unwell with a fever, perhaps a runny nose and a strange rash. When I say "unwell", I mean not their normal bubbly selves, but not seriously sick either.

What the parents are most worried about is the rash and what exactly it is. The majority of these rashes are merely ‘viral rashes’. They look bad, their bark is loud, but their bite is not.

In fact, I have noticed that my children often have random rashes. They may be very slightly off colour, they get covered in a rash from head to foot and I start to wonder if this is the beginning of chicken pox. Two days later, they’re back to their normal selves and the rash has gone. 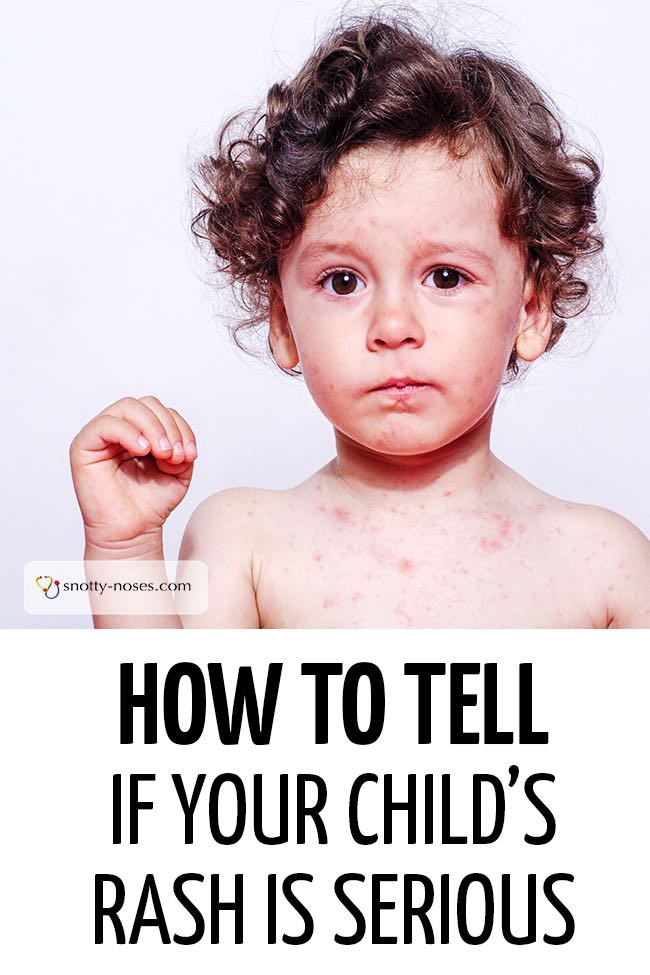 There is rash called 'Erythema Toxicum Neonatorum' that is very common in young babies.

It is totally harmless. It comes and goes in the first few weeks of life.

It may be just a red splotchy rash. Commonly there are white pustules that are raised and feel quite waxy. They look a bit like a spot that a teenager might get, but they are not infected. The baby is perfectly well in themselves with no other symptoms. The rash just gets better by itself. 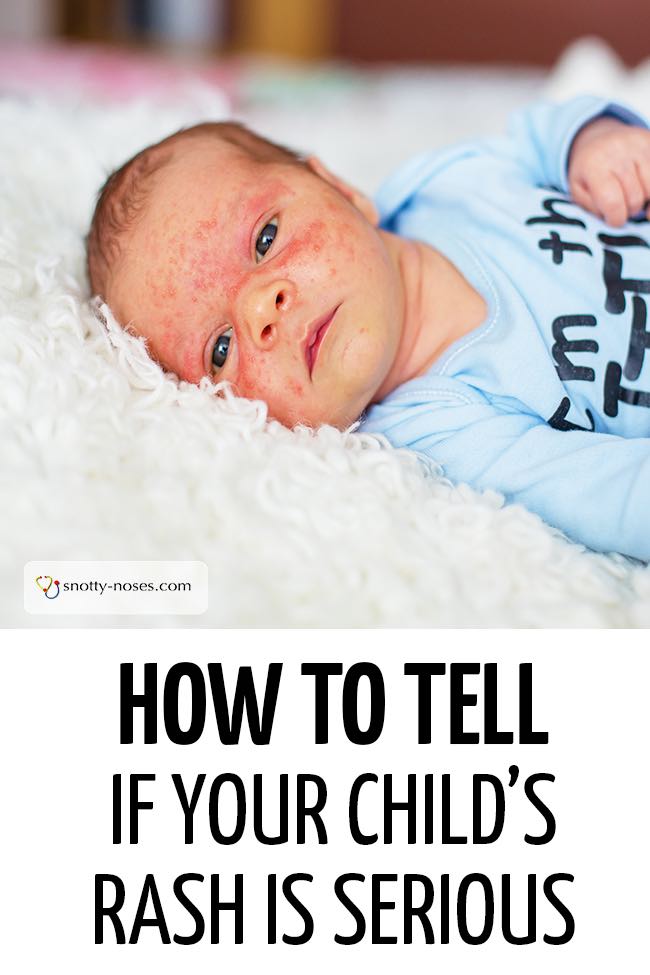 When to take your Rashy Child to the Doctor

So, what should you do about these rashes that come and go?

Firstly, is Your Child Well or Unwell?

If you're worried that your child is unwell you should take them to the doctor regardless of the rash.

If you think your child is a bit unwell, but if it weren’t for the rash you wouldn’t take them to the doctor then you don’t need to go to the doctor (unless it is non-blanching).

Secondly, is the Rash Upsetting Your Child?

Is it itchy? If so, go to the doctor and they will probably give you an antihistamine to take.

Is it painful? If so, go to the doctor.

Bottom-line: If you are worried, go to the doctor.

Also known as "prickly heat". It's very common and occurs in the hot stick months!

Heat rash is harmless but it can be irritating.

Rashes Due to Allergies

The final scenario that I haven’t covered is allergies.

Some children are allergic to things and come out in rashes when they touch them or eat them.

The rash tends to be slightly raised, red and confluent in areas (all joined up). Sometimes the middle bit is whiteish. The majority of rashes that are caused by allergy are self limiting and the cause is seldom found.

If your child has problems breathing (for example, wheezing) or facial swelling, they may be having an anaphylactic reaction call an ambulance or take them straight to A&E